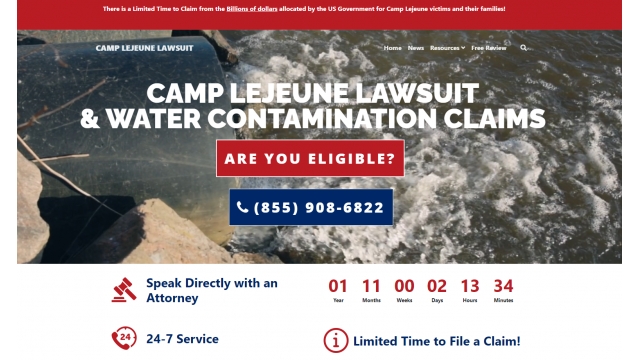 With a limited time to file claims for the billions of dollars allocated by the government, Camp Lejeune families and victims must act to receive their fair share of compensation. Comprehensive resources have been provided at https://www.mccslejeune.com/ for all prospective victims.

In recent months, reports and evidence supporting the existence of unacceptable, toxic water at Camp Lejeune began to surface, leading experts to believe that many instances of illness and diseases could be directly attributed to time spent there.

With Congress recently passing the PACT act, President Biden’s decisive act of signing it into law allows people who were sickened by contaminated water to lay claim to financial compensation. The Camp Lejeune Justice Act states that anyone living or working on the base between 1952 and 1987 for at least 30 days was exposed to contaminated water and, therefore, is eligible to file a claim against the United States Government. Service members who were stationed at Camp Lejeune and their families had been exposed to toxic levels of contaminants in drinking water. Two of the eight water treatment plants associated with the base had significant issues that led to contamination.

For nearly thirty years, thousands of people at Camp Lejeune were diagnosed with cancer, autoimmune conditions, and Parkinson’s disease, yet the cause of these illnesses was not directly attributed to Lejeune’s drinking supply. What makes the situation particularly appalling is that government officials learned of the issue during the first six years that the water treatment plants were being used, but slow study led to hundreds of cases of toxic contamination.

Despite the fact that government officials were aware of toxic water contamination issues at Camp Lejeune, little or nothing was done to rectify the situation. Those who were affected by the water supply did not learn of potential problems until the 1990s. For decades, people had been treated for conditions and illnesses that were caused by the water without knowing the true origin of their disease. Victims had been deprived of their rights due to a statute of limitations.

Those who have had a diagnosis of one or more of the following conditions may be entitled to financial compensation. With the recent lift on North Carolina’s statute of limitations, it is now possible to file a claim to protect you and your family members, offset medical expenses, and provide a better quality of life while undergoing treatment.

Getting started is easy. Simply visit https://www.mccslejeune.com/ for more information on starting a claim, determining eligibility, and the next steps you need to take. Experts are on call 24 hours a day, ready to connect you with an attorney, start your claim, and provide you with all the information needed to receive compensation for your condition. With under 24 months to file, your action is needed to hold government officials accountable for their criminal negligence.