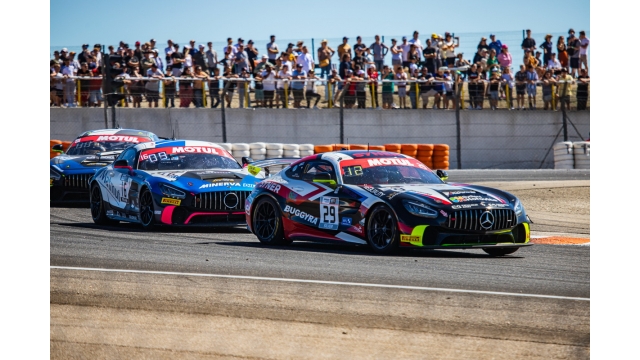 Discovering the track for the first time this weekend, Aliyyah came on leaps and bounds from free practice and qualifying and claimed a pair of positive results in the two one-hour races. The pair, aboard the #29 Mercedes-AMG GT4 car, finished 15th in the opening race on Saturday, their best result yet, before taking 25th in Sunday’s Race Two. The result gives Aliyyah added confidence and motivation ahead of the final round of the 2022 season, which takes place at Paul Ricard in October.

“Overall, I think the weekend went pretty well, it is an interesting track. On Saturday, we got our best result in this championship, so I was really happy with that. We still have a lot of work to do but I am looking forward to the next round already.”

After a break of almost two months, Aliyyah was back in action at the demanding 3.151km Ledenon circuit in the south of France. Off the back of a learning weekend last time out at Spa-Francorchamps, Aliyyah and team-mate David Vrecky got to grips with the circuit in free practice, making strong improvements from FP1 to finish FP2 25th overall and eighth in the Silver Cup class.

Aliyyah qualified 29th overall for the opening one-hour race of the weekend and kept her nose clean during a hectic first lap to move up three places to 26th as the safety car was deployed following an incident ahead. At the restart, Aliyyah made more progress by moving up to 23rd position and, by keeping a good rhythm and consistent pace, she was able to swap over with Vrecky at the mandatory driver-change pit-stop from 20th place.

The #29 Mercedes-AMG GT4 was just outside the top 20 at the start of the second stint, but a second full course yellow period bunched the pack up inside the final 15 minutes. That gave Vrecky and Koloc the opportunity to make up more ground, which Vrecky did, finishing a superb 15th overall and sixth in the Silver Class.

“My qualifying went really well; I improved my time [from practice] and felt really good,” Aliyyah said. “The field is so tight, so we still finished but I felt comfortable. In the race, it was another chaotic start, and we got a safety car in the first few laps. Then I lost around two positions at the restart, and I was defending before handing over to David. He did a really good stint and we finished 15th which is many positions gained, so we are really happy with the first race.”

Vrecky started Race Two from 27th on the grid and quickly made ground in the early stages, running as high as 18th before slipping to 21st before the pit window opened. Aliyyah then took over the #29 for the second stint and continued the strong showing from the first half of the race. Despite dropping a few positions before the end, Aliyyah brought the car home 25th overall and 11th in Silver Cup.

Summing up her Sunday, Aliyyah said: “David started the race and I got in second, but the tyres were not their best when I got into the car, so that made it pretty difficult. I got passed by two or three cars, but had some good fights, so this was an okay result.”

Buggyra ZM team principal Martin Koloc was satisfied with the weekend: “Saturday was incredibly good; Sunday was a good, a steady performance. Both drivers drove consistently at the same pace, we had no issues and overall, we learned a lot this weekend for our GT4 and GT3 programmes.”

Aliyyah will be back behind the wheel for the final round of the French GT4 series in Paul Ricard from 14-16 October.